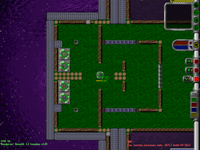 I began work on a replacement for ARC in 2006. I sort of stalled development on it after I got some of the basic code done in SDL, including map loading and rendering code. Since Sierra has terminated ARC, I've resumed development of ARC++. I will be putting screenshots up from time to time, as well as any notes I have about development of the project. I will include occasional code snippets in the blog, too.

I decided to make the code open source as of November 15, 2008. Hopefully this will get the project some attention and get some people interested in working on it. Any volunteers?

There are two versions of ARC++ currently available. One for Windows and one for Mac OS X (my Linux install is out of commission for the moment).

NOTE: This is a public preview with no networking support. This version is primarily for testing the collision detection, game mechanics etc. It should be considered proof-of-concept only.

ARC++ is a remake of the classic PC game ARC (Attack Retrieve Capture). ARC was originally developed by John Vechey and Brian Fiete in 1997 as a college project. John and Brian later published the game under Hoopy Entertainment (incidentally, this company later became PopCap Games and continues the tradition of making simple yet addictive games). In 1998, ARC moved to the Total Entertainment Network (TEN). When TEN dissolved in 1999 to become Pogo.com, they dropped support for ARC. Sierra On-Line picked ARC up for their World Opponent Network (WON) the same year, and had the brilliant (?) idea of inserting advertisement banners into ARC games. When WON dissolved, Sierra continued to keep ARC up, though reluctantly. There was a constant threat of being discontinued, which did eventually happen in August of 2007. As it currently stands, ARC is no more.

Basically, ARC is a capture the flag game with pizazz. There are two to four teams (green, red, blue, and yellow). Each player pilots a ship of his or her team's color. The ships move around a plane. There are obstacles which the ships cannot pass through (walls, areas with no floor, etc.)

There exist two categories of weapons, which are the laser and the special weapons. When the laser is fired, its power drains. Laser power returns at a constant rate. The specials are made up of the three weapons which follow:

A player spawns with no specials but gains them over time. He or she can hold only a certain number of special ammunition at a time (three "bouncies" and missiles, and two grenades).

In "Capture the Flag" mode, a team wins by bringing the other team's or teams' flags to their own flagpost corresponding to the color of the flag. A team may have multiple flags. There are also neutral flags, which are white. A player carrying a flag moves more slowly than normal; also, he or she cannot use a teleporter or move "against" a conveyor belt.

If a player drops a team flag (not white), a player from that team or another opposing team can pick up the flag after a few seconds. If a player touches their own dropped flag or the flag is left alone for a certain time, the flag is returned to its home post immediately. Neutral flags do not return by themselves.

In "switch" or "button" mode, the map has one or more switches on it. A player "claims" a switch for their team by touching it. A team wins by gaining control of all the switches.

There is no team objective in this mode. Players only attempt to kill each other to gain a high score.